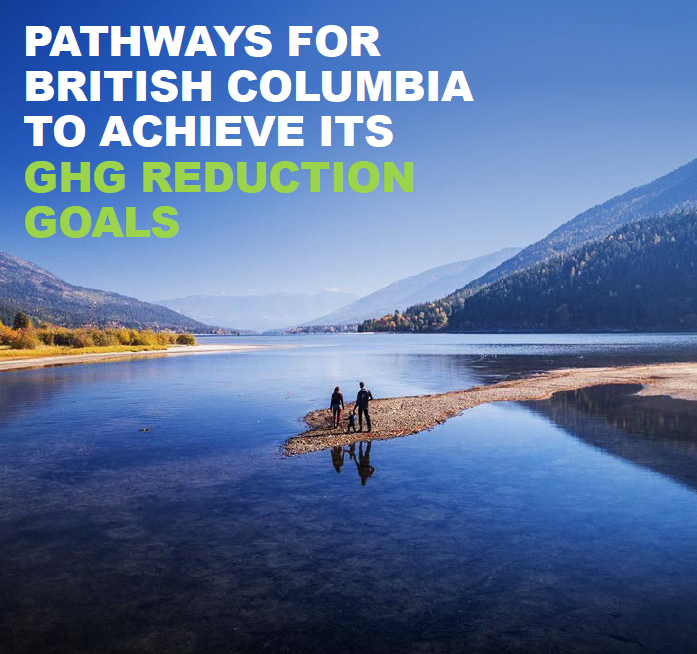 What is the best way for British Columbia to achieve a low carbon energy future?

But we don’t claim to know for certain what the best pathway would be. There are many trade-offs to be made between technologies regarding their costs and their effectiveness to reduce emissions while meeting our energy needs.

We are therefore very interested in the vision proposed by FortisBC Energy Inc., BC’s largest natural gas utility. It’s a vision that retains usage of the natural gas distribution system, but emphasizes the replacement of fossil natural gas with renewable natural gas (RNG) and ‘blue’ and ‘green’ hydrogen.

FEI commissioned an August 2020 report by Navigant titled “Pathways for British Columbia to Achieve Its GHG Reduction Goals.”[2] This report contrasts an “Electrification Pathway” and a “Diversified Pathway.” Both Pathways are modeled to achieve BC’s legislated target of an 80% reduction in GHG emissions by 2050.  However, Navigant concludes that the Diversified Pathway would be 13% less expensive than the Electrification Pathway: $668 billion versus $772 billion, respectively.

·      a 60% reduction in overall end-use gas demand below 2020 levels, with a third of the remaining gas usage being supplied by renewable natural gas (RNG) and hydrogen (mostly ‘green’[3]),

·      the sequestration of 1.8 megatonnes (MT) of carbon dioxide per year (offsetting three-quarters of the GHG emissions from the use of fossil gas),

·      powering 60% of medium and heavy duty vehicles by electricity and 40% by compressed or liquefied natural gas (LNG),

·      a complete transition to electricity for residential and commercial space and water heating,

·      switching 20% of current industrial fossil fuel use to electricity, and

·      upgrading the energy efficiency of much of the building stock.

The Diversified Pathway has many of the same measures, but with these differences:

·      the volume of overall gas demand remains at 2020 levels, with three-quarters of it supplied by RNG and hydrogen,

·      only 25% of residential and commercial space and water heating is electrified beyond what is already electric;

·      only 10% of current industrial fossil fuel use is switched to electricity,

·      natural gas powered heat pumps are installed in about 70% of buildings.

In addition to the lower estimated cost, the Pathways report claims additional advantages for the Diversified Pathway over the Electrification Pathway:

·      a reduced risk of being stymied by barriers in a particular technology, and

·      an increased potential for beneficial discoveries where a more diverse set of energy sources is considered.

The Pathways report comments in favour of the continued production of natural gas as a commodity and a contributor to the BC economy. It says that natural gas exports from BC to Asia could displace higher carbon fuels and cause net reductions of global GHG emissions. Likewise, the report claims that using LNG to displace bunker fuel in large marine vessels could reduce GHG emissions by 27% for each gigajoule displaced.

The Pathways report builds on work by FortisBC over the past several years. Fortis’s 2018 Clean Growth Pathway to 2050 document presents Fortis’s vision to align its gas utility operations with the provincial government’s GHG emissions reduction goals.[4] And, Fortis consulted with the BC government in the development of BC’s 2018 CleanBC plan, which calls for the province’s natural gas system to have a 15% renewable content by 2030.[5] Fortis has also adopted a “30BY30” corporate goal to reduce the GHG emissions of its customers’ gas use by 30% by 2030.[6]

BCSEA applauds Fortis’s initiative as making a substantial contribution to the discussion of BC’s energy future, although we have concerns about several issues.

For one thing, achieving the three-quarters RNG and hydrogen content that is modeled in the Pathway report may be impractical or prohibitively expensive.

Also, BCSEA is sceptical of the assumption that large volumes of RNG produced from processing wood waste would truly be carbon neutral. RNG produced from landfill gas or agricultural waste does reduce GHG emissions because it captures methane—a powerful GHG—and prevents it from escaping into the atmosphere. This is not the case with wood waste. Also, depending on circumstances, considerable energy inputs may be necessary to grow, gather and process the wood waste feedstock, and these inputs may have associated GHG emissions.

The Pathways report assumes additional electric capacity would come from hydroelectric projects developed at the same cost as the Site C project. However, in BCSEA’s view, less-costly resources may be available in the future, such as battery storage, capacity-focused energy conservation and ‘smart’ systems to manage the electricity load. Changing the assumed cost of new electric capacity could change the relative costs of the Electrification and Diversified Pathways.

The Pathways report relies on assumed credits from ‘internationally transferred mitigation outcomes’ (ITMOs) to discount the GHG emissions of gas produced for export from the total reductions BC must achieve to reach its GHG targets.[7] BCSEA questions whether it is realistic to assume there will be enough available international credits to offset such a GHG-intense activity as the production of fossil fuels.

Regarding the export of natural gas from BC, BCSEA is concerned that this may support growth in energy use and increased GHG emissions, rather than reducing GHG emissions through displacing coal and oil. Similarly, while displacing bunker fuel with liquefied natural gas (LNG) will cause some GHG reductions if methane leakage in the supply chain is low enough, such reductions appear to be insufficient to achieve the deep cuts needed to minimize global climate change.

BCSEA hopes more players in the energy field will publish their visions of BC’s energy future. We note that BC Hydro is now developing its updated long term resource plan, the 2021 Integrated Resource Plan. Also, we hope the incoming provincial government will move promptly to implement a further round of stakeholder consultations on a draft final report of Phase 2 of the Comprehensive Review of BC Hydro. Given the NDP’s ambitious campaign commitments on electrification and GHG emissions reductions,[8] the finalized Phase 2 report should give BC Hydro a strong mandate to pursue these issues.

[3] The Pathways report models the use of ‘blue’ hydrogen (fossil derived, couple with carbon capture and storage) and ‘green’ hydrogen (electrolysis derived using renewable energy). The proportion of green hydrogen used is modeled to increase over time. See page 23.