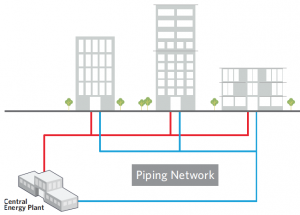 If approved by the Utilities Commission, the Decarbonization Project will reduce CE’s carbon dioxide emissions by 15,100 tonnes per year, reducing its GHG intensity by about a third. CE anticipates it will avoid a further 9,600 tonnes of emissions per year from future extensions of CE’s district energy service.

The project is largely driven by federal, provincial and municipal policy.

The most immediate influence is the City of Vancouver’s Low Carbon Energy Systems Policy. As part of the City’s Zero Emissions Building Plan, this policy requires the developers of new rezoned buildings to employ either a high level of building envelope energy efficiency or a low carbon energy system.

This effectively forces CE to decarbonize its district energy system if it ever wants to acquire new customers.

On the carrot side, CE anticipates receiving some $13 million in subsidies from the federal Low Carbon Economy Fund and the CleanBC Facilities Electrification Fund, cutting a third off the project’s $37 million budget. CE also expects to receive discounted electricity for seven years under BC Hydro’s Industrial Electrification – Fuel Switching rate.

CE describes the Decarbonization Project as the first step toward even deeper decarbonization. Citing Vancouver’s plans to introduce GHG emissions limits for existing large buildings in 2026, CE anticipates that it may need additional electric boilers to meet the decarbonization needs of its existing customers.

Using electricity instead of cheaper natural gas will tend to drive up the rates for CE’s service, but the actual bill impacts are not addressed in the current application. A future application will address not only the bill impacts but also how CE will notionally allocate the low-carbon portion of its steam between existing and new customers. Under the City’s low carbon policy, all new customers will require low carbon service. But CE’s existing customers may wish to choose varying amounts of decarbonization, depending on their circumstances.

One may ask whether using electric boilers—which are energy intensive—is the best strategy to decarbonize CE’s district energy system. Electric heat pumps would be ideal because they are very efficient, but they would not work here because they develop heat at a much lower temperature than the steam that CE sends through its pipes.

CE gave reasonable grounds for not proposing biomass boilers or the use of renewable natural gas supplied by FortisBC Energy Inc. The biomass solution has fuel transport and air emissions problems that make it unsuitable for a dense urban setting, while the City of Vancouver’s policy will not accept Fortis’s renewable gas as a reliably permanent solution.

Interveners in the BCUC’s review have just filed their final arguments. BCSEA supported approval of the Decarbonization Project.