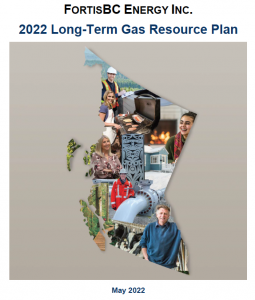 by Bill Andrews and Tom Hackney

FortisBC Energy Inc. (“FEI” for short) has just submitted its 2022 Long Term Gas Resource Plan (LTGRP) to the BC Utilities Commission for review.

“British Columbians, represented by all levels of government, Indigenous groups, and community representatives have been clear that a new path to a secure and low-carbon energy future must be developed. … This LTGRP represents FEI’s long-term view of its transition to a low-carbon energy future, and is intended to be the catalyst for rapid progress in meeting the ambitious GHG reduction targets established by the provincial and federal governments.” (FEI 2022 Long Term Gas Resource Plan, page ES-3)

For several years, FEI has been making the case that BC’s strategy for energy sustainability should develop a “diversified” energy system that includes low carbon gas fuel as well as electricity, rather than 100% electrification (see for example Pathways for British Columbia to Meet Its GHG Reduction Goals, by Guidehouse, 2020, commissioned by FEI). BCSEA and other interveners will now have an opportunity to test FEI’s approach through the BCUC’s review process.

For the first pillar, FEI recognizes BC’s target of reducing GHG emissions by 40 percent by 2030. FEI is seeking to replace much of its fossil fuel natural gas with a mixture of: “traditional” renewable natural gas (methane from landfills, agricultural waste, etc.); wood-based methane; and “green,” “blue” and “turquoise” hydrogen (the blue and turquoise varieties being produced from natural gas feedstock). There are big questions about the cost effectiveness and availability of each of these fuel resources, so this is likely to be an area of intensive debate (for example see FEI 2022 Long Term Gas Resource Plan, page 3-18 for the wide range of FEI’s scenarios for low carbon gas supply).

The second pillar is to ramp up customer energy efficiency and conservation savings from about 1 or 2 percent per year of FEI’s load to about 13 percent per year. BCSEA strongly supports an ambitious approach to conservation and efficiency, but we acknowledge that there may be an increased delivery risk at higher rates of savings.

FEI’s third pillar, compressed and liquefied gas for transportation, currently represents a niche market for FEI. FEI is trying to develop this market to help get medium duty and heavy duty trucks off diesel fuel and to replace the use of bunker fuel in local marine vessels. BCSEA cautiously supports efforts to get off diesel fuel, which causes a lot of air pollution on top of its GHG emissions. However we are concerned that the fossil fuel portion of FEI’s gas supply also causes GHG emissions. In addition, upstream leakage of methane can be a significant source of GHG emissions on top of the “burner tip” emissions.

The fourth pillar, LNG for export and international shipping, appears to be very uncertain. FEI’s load scenarios for this pillar range from a small fraction of FEI’s load to several multiples of it. BCSEA is concerned that these loads, if they are realized, might not necessarily reduce global GHG emissions. But we note that the scope of the BCUC’s review of FEI’s LTGRP will be focused on FEI’s operations and the interests of FEI’s ratepayers, rather than on global issues.

In a related development, the BCUC has required BC Hydro and FEI to use each other’s load forecasts in their respective long term plans. If this exchange is successful, it would greatly improve the understanding of the effectiveness and costs of FEI’s “diversified” approach to meeting BC’s GHG emissions reduction targets.

The BCUC proceeding will likely begin soon and run into early 2023.