In early July, the BC Utilities Commission publicly released a letter from commission chair and CEO David Morton to Energy Minister Bruce Ralston, asking the province to give the BCUC more control over the energy transition by BC’s public utilities. In the April 12, 2022 letter, the BCUC recommended that the BC Government legislate GHG reduction targets for the energy delivered by regulated utilities such as BC Hydro and FortisBC Energy (gas). However, the commission also asked for the authority to relax these GHG targets if energy rates rise too quickly.

The commission argues in the letter that the current approach under the GHG Reduction Regulation (GGRR) prohibits the BCUC from considering the cost effectiveness and ratepayer impacts of low-carbon initiatives by utilities. The commission says the GGRR could cause a utility such as FEI to pay too much for renewable natural gas.

The commission also recently added a section called “BC Energy Transition” to the BCUC website. The page says “The BCUC is committed to remaining at the forefront of energy transition in BC.” However, the page also reminds readers that the BCUC sees itself as having “a critical role in ensuring the interests of utility customers are protected as utilities seek to achieve the government’s objectives.”

BCSEA is not aware of the government’s response to the BCUC’s request for expanded authority regarding GHG-reduction initiatives by regulated utilities. However, in a presumably unrelated development, the government issued an order in council on June 27, 2022 limiting the BCUC’s authority to interfere with how BC Hydro recovers the costs of Hydro’s Electrification Plan from its customers.

BCSEA is encouraged to see the BCUC taking a proactive approach to BC’s energy transition and GHG reductions. The commission has a record of supporting net metering for electricity customers and renewable natural gas for gas customers, and other initiatives. However, BCSEA is not ready to support legislation giving the BCUC authority to slow down the pace of carbon reduction initiatives by regulated utilities.

BCSEA believes that energy transition and GHG emissions reductions – and the trade-offs between decarbonization and other imperatives, such as energy affordability – are so important they should be the responsibility of the government itself. The government has a democratic mandate from the people of BC. The BCUC has the advantage of being independent, but it is not directly accountable to the public. 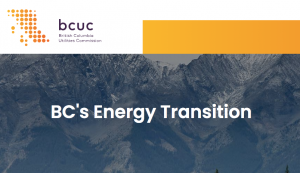