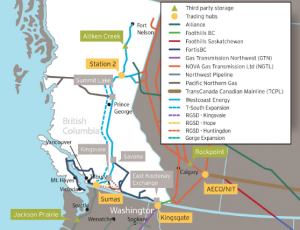 FortisBC gas utility wants to build a new gas pipeline from the Interior to the Lower Mainland. Fortis says the Regional Gas Supply Diversity (RGSD) project would meet increased demand, strengthen the “resiliency” of the gas system, and accommodate low-GHG hydrogen in the gas supply.

Fortis says market conditions in the Lower Mainland region are driving the need for more gas supplies, including the Woodfibre LNG export facility that is being developed near Squamish.

By “resiliency,” Fortis means the gas system’s ability to withstand and recover from major disruptions. With the new pipeline, Fortis could source additional volumes of gas from the AECO/NIT hub in Alberta, rather than from northern BC, where most of the Lower Mainland’s gas is currently sourced. The rupture of Enbridge’s T-South pipeline in 2018 caused a substantial interruption in the delivery of gas to the Lower Mainland for several months. FortisBC says this illustrates the need to diversify supplies.

Finally, Fortis has ambitious plans to increase the hydrogen content of the gas it delivers to customers. This is part of Fortis’ response to the BC Government’s insistence that Fortis reduce the amount of GHG emissions from the combustion of its product. Hydrogen is less energy dense than natural gas. With hydrogen in the mix, more gas will need to be delivered to match the amount of energy currently delivered to customers. This, in turn, will require increased pipeline capacity.

Fortis is currently applying to the BC Utilities Commission for approval to set up a regulatory account to track the development costs of the RGSD project. BCSEA is intervening. This is just a first step, before Fortis spends up to $50 million getting the project ready for an approval application.

Fortis wants develop the pipeline proposal  as soon as possible, to head off a competing $2.5 billion proposal recently announced by Enbridge to expanding the capacity of the T-South pipeline to deliver gas to the Lower Mainland and points south.