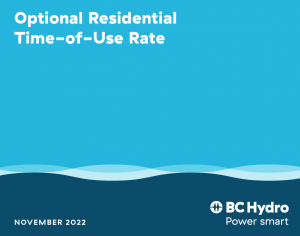 by Tom Hackney and Bill Andrews

An optional time-of-use rate for residential customers of BC Hydro may be coming soon. BC Hydro announced its plans for residential electricity rates at a stakeholder workshop earlier this month. BC Hydro will apply to the BC Utilities Commission for approval of a new voluntary time-of-use (TOU) rate. However, BC Hydro has shelved an application to flatten the current Residential Inclining Block (RIB) Rate.

The proposed optional residential TOU rate would have a 5¢/kWh discount for overnight electricity use and a 5¢/kWh premium for electricity used during the 4:00 p.m. to 9:00 p.m. peak load hours. The TOU discount and premium would be applied on top of the existing two-tier RIB rate.

Hydro’s main motivation for the optional residential TOU rate is to slow down the increase in the peak load on its system. The system peak occurs when customers all demand electricity at the same time during the late afternoon and early evening of the coldest days of the winter. BC Hydro has a legal obligation to plan to have capacity resources to meet the system peak. This is very expensive, and customers pay for it through their rates. Controlling BC Hydro’s system peak is especially important as BC foresees substantial annual increases in electric load for charging EVs, running electric heat pumps and electrifying energy use in BC.

If the BCUC approves BC Hydro’s rate design proposal, residential customers will be able to choose to be billed under the TOU rate. Presumably, they will do so if they’re willing and able to adjust the timing of their electricity use, such as by charging an EV overnight. Customers who don’t elect the optional rate would simply stay on the RIB rate.

Hydro estimates that a typical EV driver who charges at home could save about $240 per year under the proposed TOU rate. A customer could save about $25 per year per machine by running their dish-washer, washer or clothes drier during off-peak hours.

BC Hydro hopes to get half of EV drivers to use the TOU rate initially, increasing over time. Hydro forecasts potential reductions in its peak load by some 166 Megawatts by 2029 and 477 Megawatts by 2037. This would be a significant cost saving for Hydro’s customers.

Last year, we reported that BC Hydro’s RIB Rate was on the chopping block. However, that idea has been nixed, as noted above. Presumably, BC Hydro and its shareholder the BC Government were concerned about pushback. Flattening the RIB rate would mean higher electricity bills for approximately 1.4 million customers; compared to lower electricity bills for approximately half a million customers (assuming no change in consumption). BC Hydro may ask the BCUC for approval to apply future rate increases to the Step 1 rate, not to the Step 2 rate. This would gradually shrink the difference between Step 1 and Step 2.

Hydro is expected to file its application for the residential optional TOU rate in early 2023. BCSEA will likely intervene in the BCUC’s review of the application. One issue would be whether the design of the TOU rate would minimize the number of “free riders,” customers who would benefit financially from participating in the TOU rate without changing the timing of their consumption of electricity.