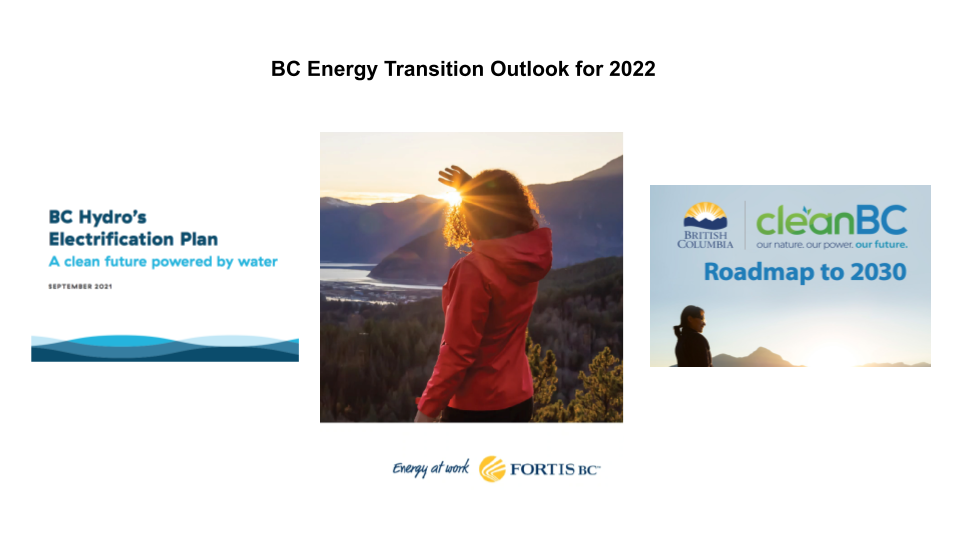 By Bill Andrews and Tom Hackney

2022 is poised to be an important year for shifting BC’s energy use from fossil fuels to low-carbon fuels. The main policy driver is the Government’s October 2021 CleanBC Roadmap to 2030  policy statement.

The Roadmap includes more than a dozen existing regulatory measures that will be strengthened and several new regulatory measures that will be introduced. Many of these measures directly or indirectly impact public utilities regulated by the BC Utilities Commission. For example, BC Hydro and FortisBC-electric will take the lead on the Roadmap’s call for substantial low-carbon electrification – the use of clean electricity in place of fossil fuels for transportation, space and water heating, and industrial processes.

In addition, FortisBC Energy Inc. (natural gas; FEI) will be dramatically affected by a new GHG-emissions cap on natural gas utilities. This regulatory cap, which the Government is currently developing, will require FEI to reduce its customers’ GHG emissions from natural gas consumption in 2030 to approximately 47% lower than 2007 levels. FEI will have to accomplish this by substituting renewable gas for fossil gas and by reducing customers’ gas usage through energy efficiency and conservation programs. The Roadmap says “The B.C. Utilities Commission will have a mandate to review gas utilities’ plans, investments and expenditures to ensure they’re aligned with the GHG emissions cap and cost effective…”

In this article we will describe four BCUC proceedings in which low-carbon electrification and GHG emissions reductions will play a central role in 2022. For BC Hydro, these proceedings are the 2021 Integrated Resource Plan and the Electrification Plan component of the F2023-F2025 Revenue Requirements Application. For FEI, the proceedings are the Revised Renewable Natural Gas Application, and the 2022 Long Term Gas Resources Plan (to be filed in April or May). BCSEA is participating actively in the first three proceedings, which are ongoing. And, BCSEA intends to participate in the proceeding for FEI’s LTGRP when it is filed with the BCUC.

Ever since the government’s Comprehensive Review of BC Hydro in 2019, BCSEA has been calling for BC Hydro to champion low-carbon electrification in BC. This is beginning to happen.

BC Hydro’s Five-Year Electrification Plan, now under scrutiny by the BCUC, calls for BC Hydro to spend some $325 million on low carbon electrification, load attraction and “connecting customers.”

Low-carbon electrification means getting existing or new electricity customers to use clean electricity in place of another energy source that emits more GHGs, such as fossil natural gas. Hydro proposes a range of LCE initiatives covering buildings, transportation and industry, including for example:

Load attraction means attracting innovative new industries and operations to BC to take advantage of Hydro’s “clean energy advantage.” Support and incentives would be provided for electricity connections by new mines, data centres, crypto-currency operations, carbon capture operations and producers of synthetic fuel and hydrogen. BCSEA does not necessarily agree that all these potential uses of electricity are appropriate for a low carbon future.

“Connecting customers” means expediting requests for interconnection studies by would-be industrial and large commercial customers interested in connecting to the BC Hydro grid. This is intended to facilitate low-carbon electrification and load attraction, and is particularly important for gas producers who can choose between using gas and electricity to power their operations.

Over the next three years, Hydro expects its Electrification Plan to add about 2% to Hydro’s current forecast load and to reduce BC’s GHG emissions about 1.3%. Hydro says its low-carbon electrification and load attraction programs will be cost-effective, in that they will garner more through electricity revenue than they will cost. And therefore, they will result in lower rates for all ratepayers.

BC Hydro’s Five-Year Electrification Plan is a big, ambitious initiative, affecting a wide range of energy-using activities across society. BCSEA is hard at work assessing it. For example, Hydro is still constrained by government policy that restricts low-carbon electrification measures to those that earn net revenues and put downward pressure on rates. Does that result in important low-carbon electrification opportunities being missed? For now, we are encouraged that Hydro has brought forward this extensive and detailed plan.

BC Hydro’s 2021 Integrated Resource Plan (IRP) addresses Hydro’s load requirements over the next 20 years, and how it will meet them. In addition to a Base Resource Plan, the IRP addresses contingencies, such as the possibility of a major increase in electrification above the amount included in the Base Resource Plan.

For near term actions, BC Hydro proposes, among other things:

BCSEA strongly supports more electrification of energy uses currently met with fossil fuels. One of BCSEA’s objectives for the BC Hydro IRP proceeding is that BC Hydro produce modeling results and contingency plans for scenarios of loads, supply resources and DSM for both electricity and natural gas that in combination would meet BC’s GHG emissions reduction targets.

FEI’s current RNG program is voluntary: customers can voluntarily choose to pay a premium price to receive RNG instead of conventional (fossil) natural gas. A participant in the RNG program can choose the proportion of their gas that will be RNG, from 5% up to 100%. Participants range from large customers who have GHG-emissions requirements to customers who altruistically want to reduce their carbon footprint. Renewable Natural Gas is produced from organic material such as agricultural waste, sewage, and municipal green-waste. The source material is turned into biogas in an anaerobic digester. The biogas is cleaned up to meet pipeline quality standards. RNG is considered zero carbon in BC regulations, although this has been criticized as overly optimistic. RNG can be transported by pipeline and used by gas customers more or less interchangeably with fossil natural gas.

FEI acquires RNG under long-term contracts that specify the GHG intensity limits, price, quantities, and delivery point. Some of the RNG acquired by FEI is produced within FEI’s service territory and injected directly into the FEI distribution system. The rest of the RNG acquired by FEI is produced in BC outside the FEI service territory or in other provinces or U.S. states. This RNG is delivered notionally to a designated receipt point on the FEI system, using industry standard contracts for notional delivery of natural gas. RNG acquired by FEI is actual RNG, not “credits” or “unbundled environmental attributes.”

FEI’s RNG program began in 2011 with BCUC approval. Since then, the RNG program has received legal backing under the Clean Energy Act and the Greenhouse Gas Reduction (Clean Energy) Regulation. The CleanBC climate action plan calls for RNG to comprise an ambitious 15% of FEI’s gas supply to non-bypass customers by 2030, which FEI says it is on track to meet. As discussed above, the Roadmap to 2030 calls for even larger amounts of RNG to be incorporated into the FEI gas supply. The Roadmap, and amendments to the GGRR, also broaden the eligible types of renewable gas to include synthetic gas, lignin and hydrogen. The GHG-intensity, conventional environmental impact, and practical availability of these newer types of RNG are uncertain and to some extent contested. However, extensive adoption of Renewable Natural Gas is a key element in the CleanBC Roadmap to 2030 climate action plan.

In late December 2021, FEI filed with the BCUC an application for a revised and expanded RNG program. The proposal has three elements:

Continuation of the voluntary RNG sales program is not controversial for BCSEA, which has supported the RNG program since it began.

Blending RNG into the general gas supply is a notable step forward that BCSEA has long advocated. All gas customers, not just those who volunteer to pay a premium price for RNG, need to begin reducing the GHG emissions from the gas they consume.

FEI’s proposed “Residential Gas Connections service,” however, is highly contentious. FEI’s intention is to try to protect its share of the market for heating energy types in new residential construction, particularly against electric heat pumps, electric resistance heating, and low-carbon district energy systems. The City of Vancouver has already imposed GHG intensity performance requirements on new buildings that preclude the use of natural gas heating equipment with conventional (fossil) natural gas. And other cities and municipalities are moving in a similar direction, to limit the GHG intensity of heating sources in new construction.

FEI’s proposal would have all sales gas customers cross-subsidize the extra cost of RNG to enable gas heating equipment to be installed in new residential construction. This would distort the market for low-carbon heating options in residential construction. Gas equipment with cross-subsidized RNG would have a significant and unfair price advantage over clean electricity and low-carbon district energy systems.

Another problem with FEI’s “Residential Gas Connections service” proposal is that it clashes with the regulatory cap on FEI’s customers’ total GHG emissions that is being developed pursuant to the Roadmap to 2030 policy. In order for FEI to reduce its customers’ total GHG emissions in 2030 by 47% from 2007 amounts, FEI is going to have to both allocate substantial amounts of RNG to its existing customers’ gas supply at their expense, and reduce existing customers’ load through demand-side measures. The cap on GHG emissions from gas customers means that FEI needs to reduce its gas load, not increase it.

FEI’s instinct to increase its gas load by obtaining new gas connections in the residential new construction sector comes from the pre-cap era. Before the cap, the financial analysis was that new residential gas connections would increase FEI’s revenues more than FEI’s cost of the connections and that this would financially benefit existing customers because there would be more customers sharing the costs of the distribution system. The cap will reverse this dynamic, assuming the cap is implemented as described in the Roadmap.

FEI is scheduled to file its Long Term Gas Resource Plan (LTGRP) for BCUC review in April or May of this year. The content of FEI’s long-term plan will be greatly affected by the GHG emissions cap now being developed by the Government pursuant to the Roadmap to 2030.

In terms of timing, we expect that FEI’s LTGRP will be filed before the Legislature enacts the enabling legislation for the cap and the Government adopts the regulations to legally implement the cap. However, we also expect that some of the key elements of the cap will be hammered out between the Government and FEI behind closed doors before FEI files its LTGRP.

From BCSEA’s perspective, it is crucial that the Government stand firm on implementing a cap as the cap is described in the Roadmap to 2030. The single most important factor is that the cap must be a genuine cap on total GHG emissions, not a GHG intensity limit that would allow GHG emissions to be higher with higher gas throughput. A genuine cap is what will drive FEI to reduce gas throughput in addition to acquiring more RNG.

BCSEA participates in FEI’s Energy Efficiency and Conservation Advisory Group FEI’s meetings and also in FEI’s workshops on the development of the LTGRP. At the December 2021 LTGRP workshop, FEI provided early information on a host of topics it will address in the LTGRP. One of the many issues of concern to BCSEA is the future supply of new types of RNG such as synthetic gas, lignin and hydrogen that are now authorized as RNG in the GGRR and featured in the Roadmap to 2030. What will the cost be? How much will be available at what prices? What is the GHG intensity of these fuels? Will production of these new types of RNG cause environmental impacts? How much of the production will be inside BC and how much outside BC? Will FEI agree to prioritize allocation of RNG to energy-uses that cannot be easily met with clean electricity?

In conclusion, 2022 promises to be a banner year for regulatory decisions that will shift BC energy use away from fossil natural gas and toward clean electricity, RNG and energy efficiency and conservation.